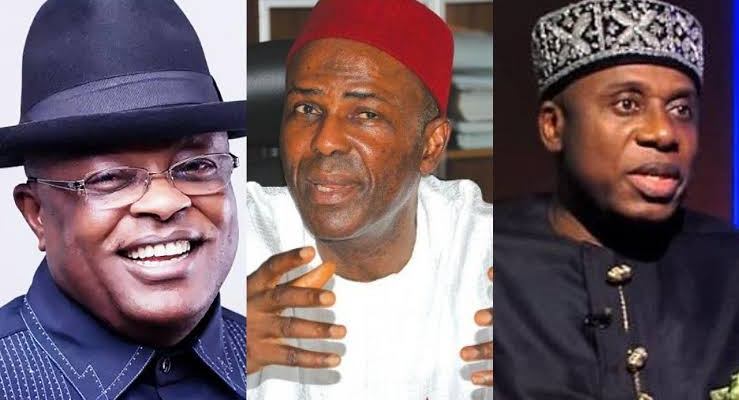 Minister of Transportation, Rotimi Amaechi, Ebonyi State Governor, Dave Umahi and Minister of Science and Technology Dr Ogbonnaya Onu, were on Sunday named as the best presidential candidates from the Southeast, by a coalition of Igbo groups and Ohanaeze Ndigbo Youth Council Worldwide, OYC.

According to the coalition, it arrived at the decision after a joint meeting in Abakaliki where it deliberated on the best candidate from the Southeast and South-south for the presidency in 2023.

The statement reads: “Umahi is the jewel of the Southeast with evidence of infrastructural development in Ebonyi. He is the best-performed governor in the Southeast and he is eminently capable to be PDP Presidential Candidate in 2023.

“RT Hon Chibuike Amaechi, is a true son Igbo Nation, former Governor of Rivers State, and currently the Minister of Transport, we believe that he’s the most trusted person in the seat of power and Igbo adage that says “one good Gesture done to one can be reciprocated to another ” Buhari can reciprocate this kind gesture to Igbos through RT Hon Chibuike Amaechi.

“Dr Ogbonnaya Onu is a first-class scientist, a former Governor of Old Abia, won the Defunct APP Presidential Ticket in 1998, the Former National Chairman of Defunct ANPP, the Arrowhead of the Merger of three Political parties that formed APC and the Minister of Science and Technology, with impeccable leadership qualities, Tested and Trusted, a Great Nigerian Patriot and without any trace of Corruption allegations for decades, he’s the most consistent Igbo politician and well acceptable across Nigeria.

“These are the best presidential materials and candidates Igbo youths present to Nigerians at the moment.”