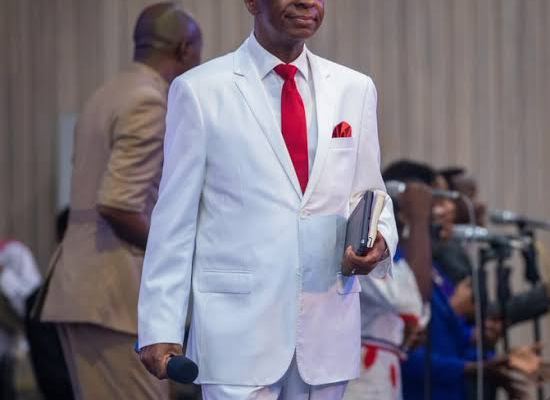 The head pastor of Living Faith Chapel Worldwide, Bishop David Oyedepo, has said that anyone who does not pay tithe has a financial cursed.

Oyedepo said this in a tweet on Thursday. Forbes puts him at number one on the list of Nigeria’s richest pastors.

The man of God tweeted, “Tithing is an inescapable covenant obligation. Prosperity, not just wealth, is impossible without tithing because when you are not paying tithe, you’re under a financial curse.”

He followed up that tweet on Friday with another, saying that most of the problems men face have to do with their financial dealings.

“The way you handle your financial dealings determines greatly what happens to you financially. Many things that afflict men are traceable to their monetary dealings. False financial dealings can open doors to inexplicable afflictions,” he said.

While most of his followers agreed with what he said, others like Daddy Freeze, who is notorious for criticising Nigerian pastors, had a different opinion.

He wrote on Instagram, “Utter nonsense! Are you one per cent as prosperous or as wealthy as Jeff Bezos, Bill Gates and Warren Buffet who don’t tithe? I personally find this unscriptural statement manipulative and cruel.

“Christ didn’t collect tithe neither did the disciples, yet no one was cursed! Tithing is the old law, obeying the old law partially, without obeying all the 613 laws of Moses is what carries a curse. That’s why to us Christians, it’s referred to as the law of sin and death!”

Tweeting with his handle, @Obasifoundation, he wrote, “Whom did God command to pay tithes and to whom? God told all the nations of Israel to pay tithes from the land he gave… the new covenant is superior and better than the old covenant with better promises. The Bible says if the old covenant was perfect enough there wouldn’t have been a need for the New Covenant.”

“Again in Matt. 23:23, Jesus rebuked the Scribes and Pharisees and he said woe unto them and called them hypocrites for over-emphasising the payment of tithes.”

@kingmichaelthe2, tweeted, “But Jesus Christ, our Lord, the owner of the church, never threatened nor forced anyone to tithe… he who comes to me shall by no means be cast away. How will he now curse those who believe in him because of 10 per cent of their salaries? God is a merciful and loving God. God is love.”

However, his followers stood by him and rather said they should not discourage others from paying tithe.

@iam_theMK tweeted, “We pay and God is blessing us, if you won’t then seal your lips. You can be cursed for sounding rude at the blessed man of God.”

@iamcedar tweeted, “There are two laws governing kingdom prosperity – spiritual (tithing and giving) and natural (investing, competences, value). Both complement each other and can’t stand alone if you indeed want kingdom prosperity. I’m not a ‘Winner’ but I agree prosperity is impossible without tithing.”