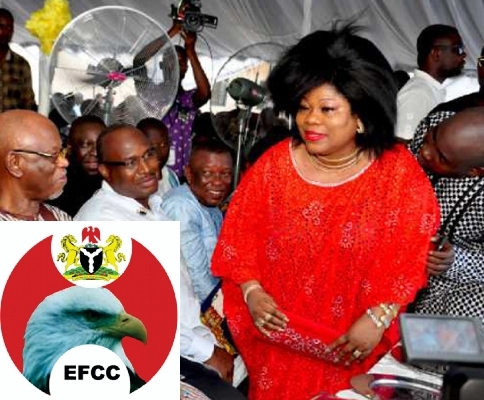 The Economic and Financial Crimes Commission has today recorded a major breakthrough in the fight against corruption as Justice Taiwo Taiwo of the Federal High Court, Abuja, on Wednesday, July 1, 2020, ordered the interim forfeiture of 48 choice properties, spread across the Federal Capital Territory Abuja, Bayelsa, Enugu, Edo and Delta states, allegedly belonging and/or linked to the former Chairman of Board of Directors of the Nigerian Social Insurance Trust Funds, NSITF, Dr. Ngozi Juliet Olejeme. The brilliant Mrs Olejeme was appointed chairman of the NSITF by late president Umar Musa Yar’adua, in 2009. The EFCC in a press release this evening, said that the former Chairman of NSITF who was also the Treasurer of the Jonathan-Sambo Campaign Organisation in 2015 has been on the run since 2016 and was in September, 2017, declared wanted by the EFCC for criminal conspiracy, abuse of oﬃce, diversion of public funds and money laundering.

The Commission alleged that she had along with Mr Umar Munir Abubakar, former Managing Director of NSITF, mismanaged and diverted over ₦69 billion, belonging to the Federal Government, into their personal bank accounts through the award of dodgy contracts to proxy companies.

The order of forfeiture was granted after counsel to the EFCC, Ekele Iheanacho, convinced the court that the properties were purchased with proceeds of crime. He proved his position with 14 exhibits, attached to his affidavit, filed on May 29, 2020.

The EFCC said “in granting the application, Justice Taiwo ruled that the interim order should be published in a leading newspaper within seven days of receipt of the order and for any interested party to show cause within 14 days as to why the properties should not be permanently forfeited to the federal government.”

Mrs Olejeme was also appointed as a director on the Board of the Ajaokuta Steel Company Ltd by President Olusegun Obasanjo in 2006. She has held several high-profile positions in administration and management, and has received a lot of national and international awards. She was also the treasurer for the Goodluck Jonathan Campaign towards the Presidential Election of 2015.

A sound administrator, Mrs Olejeme saw to the birth of the Employee’s Compensation Act in 2010. She was fierce activist and seasoned entrepreneur.