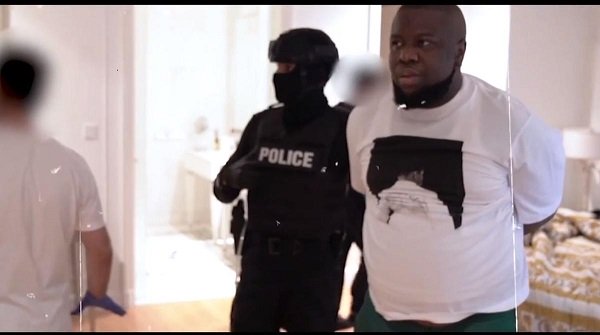 In a video posted on its official Twitter handle, the police in the oil rich gulf kingdom said, the arrest was a culmination in about 4 months of investigations against the alleged fraudster and his gang.

The police also revealed that upon the arrest of the cultprits, it was discovered that the gang gas defrauded people to the tune of 1.6 Dirham (168 Million Naira).

According to the details released on thursday, no fewer than 1.92 million people across the globe fell victims to the fraud scheme.

Recovered at the various residences of the gangs, according to the police were 13 luxury cars valued at 3.7 million Nigerian Naira.

Dubbed operation “Fox Hunt 2”, the raid is captured in a single shot frame style, the video starts with a siren blasting in the dark, before it segues into a scene of police men storming the resident of the fraud kingpin while a narrator reels out details.

“In less than just four months, the Dubai Police Force was able to solve the new operation dubbed Fox Hunt 2, where 12 other gang members were also arrested.

“Six raids were carried out simultaneously while the suspects were sleeping in their Dubai residences. After months of investigating and hours of monitoring the gang’s social media accounts, a team of highly trained Dubai Police officers were able to confirm the gang’s whereabouts and fraudulent activities.

“The Nigerian Instagram celebrity, who was arrested on multiple fraud charges for crimes committed in different parts of the world, boasted about his wealth and expensive possession on social media, claiming he is a successful businessman.

“Little did Abass (Huspuppi) know that Dubai E-police were tracking his every move and taking note of all his social media activities.” The narrator said.

The police said, the gang usually creates genuine looking website as copycats to originals and redirect financial payment from those to theirs.