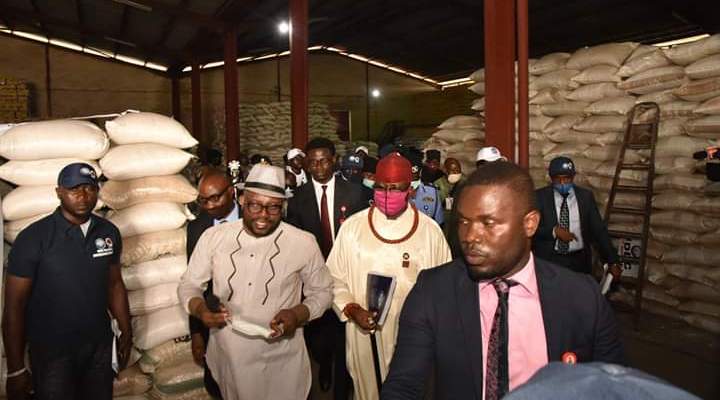 A major succour is coming the way of the people of the oil producing southern part of Nigeria, as the Niger Delta Development Commission, NDDC, has commenced distribution of free medical supplies, relief materials, as well as public enlightenment Campaign across the Niger Delta region of Nigeria as a measure to contain the COVID-19 pandemic among its communities. This was announced this afternoon in a press release through Charles Obi Odili, the Director, Corporate Affairs.

While making a speech during the flag-off ceremony at the NDDC Warehouse, in Trans-Amadi Industrial Layout, Port Harcourt, the Commission’s Acting Managing Director, Professor Kemebradikumo Pondei, lamented that the poor state of health facilities in the country, and most states of the Niger Delta region in particular, is a major challenge in the fight against COVID-19.

He explained that, “No doubt, the disease has also taken its toll on the socio-economic well-being of citizens, especially as most small and medium scale businesses have been affected with the lockdown imposed in the states.”

Professor Pondei, who was appointed three months ago by President Muhammadu Buhari, noted that the economic wellbeing of the people of the region was exacerbated by the series of lockdowns being imposed by both the federal and state governments as a precautionary measure to stop the spread of COVID-19 in Nigeria.

“The good relationship between the governments of states in the region offers opportunity for synergy in efforts geared towards providing lasting solution to the socio-economic challenges of the people in the region.”

Pondei continued that the NDDC is obliged to complement the efforts of the nine states covered by its mandate in response to the directive of President Muhammadu Buhari, stating that, “All the nine NDDC states were supported with funds. In addition, funds were also given to women and youth groups as palliatives.”

The CEO/MD added that the funds given to the states were utilized for the procurement of medical equipment such as special diagnostic equipment, critical care equipment, including ventilators and consumables. Others, he said, were various food items, beverages, sanitary materials and disinfectants.

Pondei said: “Also provided were support needs for the physically challenged, such as wheel chairs and crutches. The funds also cover sensitization and public enlightenment campaign as an important measure to contain the spread of Coronavirus in the Niger Delta region.”

In his own remarks, the NDDC Executive Director, Projects, Dr. Cairo Ojougbo, said that COVID-19 is the most important issue in the world today, and the Commission has come up with programmes to curb the spread of the virus.

The Chairman of the NDDC Palliative Committee, Mr. Soboma Jackrich, described the ceremony as a laudable and historic event, stating: “When you put square pegs in square holes, you should expect good results. Members of the Interim Management Committee, IMC, are people that mean well for the region, I thank the IMC for finding youths worthy of being involved in the programme.”

The Secretary-General of the Traditional Rulers of Oil Minerals Producing Communities in the Niger Delta, TROMPCON, Chief Frank Okurakpo, lauded the NDDC, for coming up with the initiatives while describing the Commission as an auxiliary gear that extricates the people from difficult situations.

He however warned that the NDDC should not be used as a breeding ground for politicians, stating that whoever wanted to vie for any political office, should do so from elsewhere and not from the NDDC.

The Amamgada XII of Rebisi, Eze W. Akarolo, commended the NDDC for its development efforts in the Niger Delta and welcomed the intervention of the Commission in the fight against the COVID-19 pandemic.

A Niger Delta youth leader, Mr Jonathan Lokpobiri, expressed gratitude to President Buhari for approving the distribution of palliatives to cushion the effects of COVID-19 on the lives of vulnerable people in the region.

He said: “My appeal to the management of the NDDC is that we should jettison politics and focus on the development of our people.”